In this post I clean up some data on daily birth numbers in the Netherlands and Belgium. When our daughter was born, it was very busy, lots of babies were born. This was told to us independently by doctors, nurses and other professionals in babies. So I started thinking about the variance in the number of babies that are born in a time period. It would be nice to have the number of babies born each day (each hour!) in Amsterdam, but I could only find data from the Netherlands, and also daily data from Belgium, which I include as well for later reference.

The original data can be found through the links below. In this post I clean up the data and I include some initial exploration. The clean files, and this notebook, can be found on my GitHub.

The goal is to later do some research on the technical topics of Gaussian Processes and overdispersion. The research questions I have in mind for now are 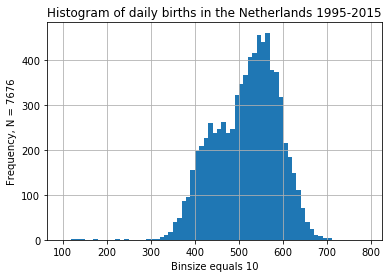 The distribution of dates looks insteresting with two bumps and some weird outliers. Looks like I retrieved the original data anyway.

Not only is the date format very nonstandard, there are three different formats used. This is from CBS, the official supplier of statistics in the Netherlands. If I was completely certain the dates are in order, and nothing is missing, just generating a new daterange is much quicker, but I chose to just deal with it and parse all the dates.

To translate the named months to numbers (), I couldn’t find a list of the dutch months in this particular format, so I’ll write them myself. Since the names are in Dutch, if I could somehow set the locale of the date formatting, it would be nice to use a formatting string, but I didn’t find that option. Writing regexes, especially named ones, feels good anyway!

In an undocumented feature that I found through GitHub, it is possible to combine columns of parts of dates into a datetime64-series. The alternative would be to use .map or .apply, but that would be much slower. There is no easy way to create an array of datetimes in numpy, which seems a bit weird, but it was alluded to, I believe in the recent announcement of the first ever (…) numpy funding round by the Moore foundation, to be spent by the Berkeley Institute for Data Science.

The same system can be used to extract the other format.

There is also a numerical format which can be parsed easily with a formatting string. 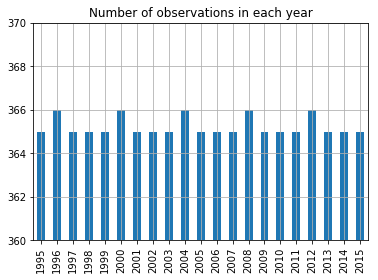 A yes, the extra February 29th each year. 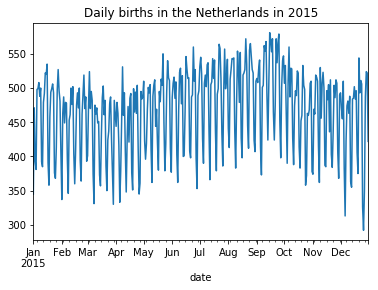 The data from Belgium is a bit more recent, but for a shorter period (2008-2016) than the Dutch data (1995-2015). The format is a lot better, without any cruft in there, and normal dateformatting. As a result, the cleaning up is only a couple of steps. 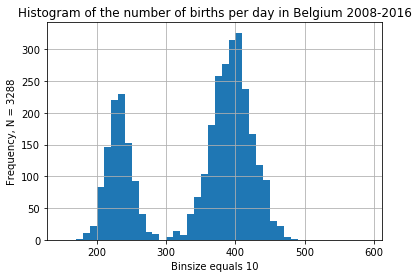 Some overdispersion is to be expected, but this last graph is a bit weird. Perhaps for some years, only the north or the south of Belgium is included in the statistics? Or is it a big weekend effect? 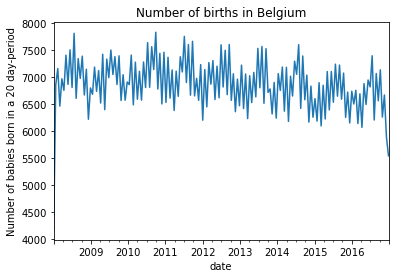 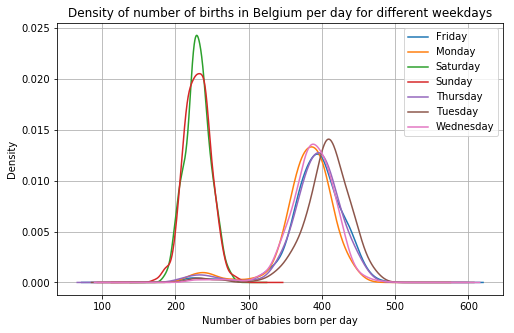 Alright, that’s the weekend effect then. This effect seems to be a lot bigger than in the Netherlands. In the last graph, a density works a bit better than a histogram for comparing the days.

Densities are always hard to interpret though, especially the height difference here. The point of this graph is to show that there is a large difference between the weekends and the weekdays, and that that effect is stronger in Belgium than in the Netherlands. But you always get more with a graph! The height difference is apparent, which means that there is less variance in the births in Belgium, especially on weekends. This is at least in part because there are less births in belgium anyway, so the variance is less as well.

As mentioned, I want to explore the idea of overdispersion and Gaussian Process regression. Perhaps time series forecasting is also interesting here, especially the evaluation. I just save the data for now. You can find it on GitHub.